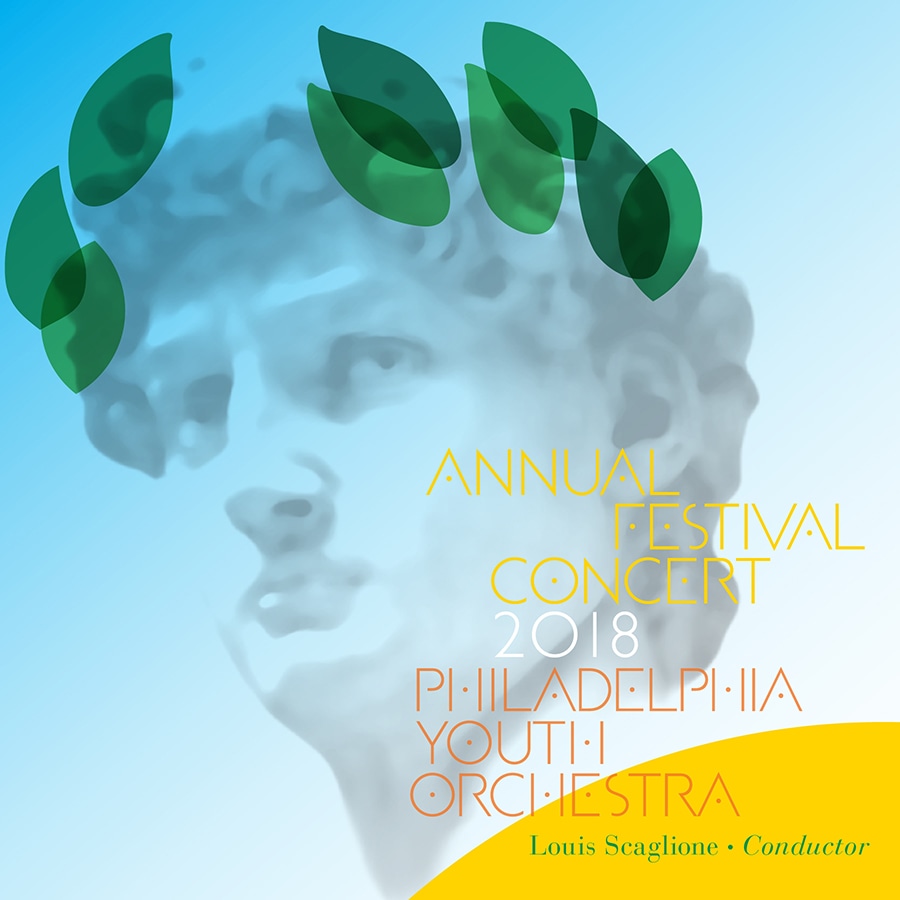 Purchase Tickets at this LINK.

The PYO Music Institute’s 2017-18 season has brought an exhilarating year of music education and performances to over 120 talented musicians, ages 14 to 21, marking the organization’s 78th Anniversary. The PYO Music Institute 78th Annual Festival Concert will feature the World Premiere of Manhattan Nights by Kevin Day, who is the Second Annual Young Composers Competition Winner, A Salute to Leonard Bernstein with Symphonic Dances from West Side Story and Strauss’ Ein Heldenleben, Op. 40. The concert will take place on Sunday, June 10, at 3 p.m., in Verizon Hall at the Kimmel Center for the Performing Arts. Tickets are $20-$30, may be purchased online at wwww.pyos.org or by calling 215.893.1999.

For the fifth year, there will be a presentation of the PYO Music Institute’s 5th Annual Ovation Award for Inspiration and Outstanding Leadership in Music Education. The award was created to honor the outstanding music teachers in the Delaware Valley who not only impart musical knowledge but help shape the lives of their students beyond the studio and stage. Ten finalists chosen by a blue-ribbon panel will be announced and presented with an award tribute, cash prize, and other recognition from our sponsors. The Ovation Award is in partnership with WRTI-90.1 and sponsored by Jacobs Music Company and J.W. Pepper.

There are many opportunities for engagement with PYO through various recognition programs like the Young Composers Competition and the Ovation Award. There were over 50 entries for the Composers Competition, demonstrating great interest in the art of composition-writing for symphony orchestra. Louis Scaglione, President and Music Director of the PYO organization, said, “We are very excited about presenting this dynamic work by Kevin Day, this year’s Composers Competition Grand Prize Winner. This nationwide competition demonstrates the interest in writing original and creative compositions, and PYO is very proud to provide a platform that encourages new musical compositions."

Scaglione continued, “In addition, we recognize that it’s the music teachers who make such a marked difference in the lives of young people as they begin and then continue their journeys through music education and, possibly, careers in music. It is our honor to recognize many distinguished educators with the Ovation Award and to announce the selected grand prize winner each year.”

Kevin Day is an American composer, conductor, and multi-instrumentalist from Arlington, Texas. He is a senior at Texas Christian University working on finishing his Bachelor of Music Performance degree, while also studying composition. Kevin has composed over 100 works for solos, concert band, orchestra, chamber, and choral groups. His works have been premiered and heard across the United States and receives commissions and premieres in his emerging compositional career. As a musician, Kevin is actively involved as a low brass player, jazz pianist, and in music production. Kevin is an alumnus of the 2016 Disneyland All-American College Band on tuba. His music has been featured at clinics across the U.S. such as the Western International Band Clinic, the National Association for Music Educators All-Northwest Conference, the Midwest Clinic, and the American Bandmasters Association Conference. A multi-award-winning composer, he has composed music for three short films -- A Partial Heart (2015), The Broken Man (2017), and Hello Henry (2018) that have gone on to film contests and festivals. An active conductor, he is currently is the principal conductor of the Next Gen Chamber Players.