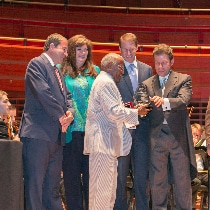 With total joy and appreciation, the warm, caring, musical legend Anthony (Tony) Williams of the Mt. Airy section of Philadelphia, was surprised beyond his belief when he was presented with the Second Annual PYO Music Institute (PYO) Ovation Award in Verizon Hall at the Kimmel Center on Sunday, May 31, 2015. Just after receiving the award, Williams, 83, beamed and said, “Of all the honors I have received, this captures me the most. I am so amazed to be the one chosen among so many outstanding people standing around me.”

Williams was one of 10 music teacher finalists nominated by current and former students. In all, 60 essay nominations were submitted in response to this question … “How has my music teacher changed my life?” For Williams’ nominator, Mark Mitchell of Wilmington, DE, it was an easy essay to write. In it, he said, “Knowing Anthony Williams has changed my life over the course of nearly four decades.” The pair first met in 1976, when Mitchell took saxophone lessons from Williams at Ada H. Lewis Middle School in East Germantown, but it was more than those music lessons that inspired the young student. Mitchell's essay explained that Williams not only introduced him to new techniques of playing saxophone, live performances in front of an audience, and jazz music at the Mount Airy Cultural Center that Williams founded, but he also “inspired me to see the importance and desire to give back through volunteerism, he showed me examples of leadership, and he always stated that he uses music as the vehicle to unlock a young person’s potential.” Today, Mitchell follows in Williams' footsteps. Like his mentor, he teaches, volunteers, and helps young people, as well.

The PYO Music Institute’s Ovation Award for Inspiration and Outstanding Leadership in Music Education was created to honor music teachers in the Delaware Valley who not only teach, but help build character and confidence for a lifetime. It was presented and endowed by the H.E.L.P Foundation and sponsored by Jacobs Music Company, J.W. Pepper, and WRTI-FM. A blue ribbon panel of music experts from local universities and institutions chose the 10 finalists. The presentation took place at the PYO Music Institute’s 75th Anniversary Festival Concert at Verizon Hall, an event that showcased the incredible talent of the organization's young students.

Williams and the other nine finalists were invited to the PYO’s season finale concert at Verizon Hall, where they were recognized on stage by the award’s sponsors: Gary A. Frank, PYO board member and founder of the H.E.L.P. Foundation; Chris Rinaldi, President of Jacob’s Music Company; Denise Collins of J.W. Pepper; WRTI’s Jack Moore, who served as host of the award presentation; and Maestro Louis Scaglione, President and Music Director of the PYO. Williams was presented with a crystal tribute trophy from Jacobs Music, a cash prize from the H.E.L.P. Foundation, and a substantial gift card from J.W. Pepper. All of the finalists received gifts, and Mark Mitchell, the nominator of Mr. Williams, was also presented with a gift card for his efforts.

Maestro Scaglione was thrilled with the selection of all of the participants and is proud that this award, launched in 2014, will continue to serve as an important platform on which PYO can highlight the vital role of music education in our culture. As the artistic and administrative leader of the PYO, one of the nation’s leading youth orchestra institutions and the area’s oldest and most respected orchestral preparatory organization, Scaglione is keenly aware of the enormous influence music educators have on all aspects of their students’ lives. He said, “We received so many testimonials from grateful students whose teachers taught them self-confidence, commitment, and life skills that reached far beyond the classroom, similar to our goals at PYO Music Institute. We believe it is important to bring positive attention to these wonderful mentors and to applaud them for their contribution to the education system and to our society.”

About Anthony H. Williams: Anthony “Tony” Williams is a legendary alto saxophonist who truly represents “The Sound of Philadelphia.” A graduate of Abington High School and Tennessee State University, Tony worked in the Philadelphia School District for over 25 years and spent most of his teaching career at three schools: Barratt Junior High School, Ada Lewis Middle School, and AMY Northwest Middle School. He is the founder and the director of the Mount Airy Cultural Center and has performed and/or recorded with many notable artists, including Kenny Gamble, Leon Huff, The O’Jays, Terell Stafford, Grover Washington Jr., and Wynton Marsalis. Tony has taught and mentored many students in education and music that have continued to make powerful contributions to the world at large. He has received hundreds of distinguished awards and honors, and has a jazz festival named after him - The Tony Williams Scholarship Jazz Festival.

About The PYO Music Institute Organization: Founded in 1939, The PYO Music Institute (PYO) organization, under the artistic and administrative leadership of Louis Scaglione, is proud to celebrate its 75th Anniversary season. The PYO, based in the tri-state region, affords its students unique opportunities to perform with the most talented, professional musicians in the area. Under the guidance of a prestigious faculty that includes members of The Philadelphia Orchestra, students grow as individuals with a keen sense of discipline and positive social interaction that prepares them for many aspects of living a successful life and provides them an impressive college preparatory credential.

The organization’s flagship ensemble, PYO Music Institute (PYO), provides the most talented students with advanced orchestral training and performance opportunities throughout the concert season. There are three PYO companion ensembles that include the Philadelphia Young Artists Orchestra (PYAO), formed in 1996; Bravo Brass, added to the program in 2003; and Philadelphia Region Youth String Music (PRYSM) created in 2007. Young musicians (ages 6-21) are selected by competitive audition and have represented the United States on five continents. PYO offers classical musical performances throughout the Greater Philadelphia region each year. In addition, the organization is a frontrunner in supporting musical education for children from Philadelphia’s most vulnerable and under-resourced neighborhoods through the organization’s outreach program, Tune Up Philly. For additional information and upcoming events, visit pyos.org.

About H.E.L.P.® Foundation and LCG: H.E.L.P.® Foundation, the philanthropic division of LCG, Ltd., dedicates time and resources in furtherance of community service and in support of charitable causes and non-profit organizations, both regional and nationwide. LCG fosters an organizational commitment to compassionate service as the nation's largest privately held employee legal plan provider. LCG maintains its national headquarters in Bala Cynwyd, PA, and has been implementing its exclusive H.E.L.P.® legal plan for worksites of all sizes and industries since 1995.

About Jacobs Music Company: Jacobs Music Company is the area’s exclusive representative for new and authentically restored Steinway & Sons, and Steinway designed Boston and Essex pianos. Jacobs also represents many other highly respected new and used piano manufacturers from around the world, including Yamaha, Disklavier, and Clavinova, all at great values. Jacobs Music Company has six showrooms, including its flagship location at 1718 Chestnut Street in center city Philadelphia, as well as Willow Grove and Whitehall, PA, Cherry Hill and Lawrenceville, NJ, and Wilmington, DE.

About J.W. Pepper: J.W. Pepper®, based in Exton, PA, is the leading retailer of sheet music in the world. In business for over 130 years, they have 11 store locations and two distribution centers across the country. They review over 21,000 new titles every year and hand select the very best. Customer care is at the heart of their service. For more information, visit jwpepper.com.

About WRTI: WRTI is a member-supported, public radio station that broadcasts the very best classical music and jazz recordings, and produces innovative, entertaining, and informative content. The station has 14 frequencies, extends west to Harrisburg and north to Scranton and Wilkes-Barre, and reaches as far south as Dover, DE, and to the South Jersey shore area.