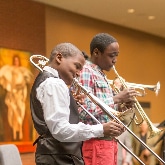 May Events at the PYO Music Institute

The various ensembles of the PYO Music Institute have a very busy month ahead with a schedule of performances that cover a vast repertoire of music and a broad spectrum of venues. Please plan to join us for one or more of these upcoming concerts:

On Saturday, May 16, 2015, at 3 p.m., PRYSM will perform its 8th Annual Festival Concert. This event will take place in Centennial Hall at The Haverford School, 750 Lancaster Avenue, Haverford, PA. The program, conducted by PRYSM Director Gloria dePasquale and PRYSM Young Artists Director Jessica Villante, will include Suk's Serenade for Strings, Selections from Mendelssohn’s Octet for Strings, and Bartók's Romanian Folk Dances. Tickets are available for $15/general admission. For more information, call 215.545.0502.

On Sunday, May 17, 2015, at 3 p.m., PYAO will present its 20th Annual Festival Concert in Perelman Theater at the Kimmel Center for the Performing Arts at Broad and Spruce Streets in Philadelphia. Conductor Rosalind Erwin will lead the young students, including Sabine Jung, cellist and winner of the inaugural Young Artists Solo Competition. The repertoire includes Weber's Overture to Oberon, Holst's Ballet Music to The Perfect Fool, the first movement from Lalo’s Violoncello Concerto in D Minor, and Rimsky-Korsakov's Capriccio espagnol. Tickets are available HERE for $15-$25 or through Ticket Philadelphia by calling 215.893.1999.

On Saturday, May 23, 2015, at 2 p.m., TUNE UP Philly will present its 5th Annual Festival at The Salvation Army Ray & Joan Kroc Center at 4200 Wissahickon Avenue in Philadelphia. This free concert, conducted by Director Paul Smith, will include Smith's New Suite for Young Orchestra. For more information, call 215.545.0502.

On Saturday, May 30, 2015, at 7:30 p.m., Bravo Brass will present “Brass Symphonies,” its 12th Annual Festival Concert at St. Mark's Church at 1625 Locust Street in Philadelphia. Under the baton of Conductor Paul Bryan, students will perform selections from Haufrecht, Beethoven, and Purcell. Tickets are $15/general admission. For more information, call 215.545.0502.

On Sunday, May 31, 2015, at 3 p.m., PYO will present its 75th Annual Festival Concert in Verizon Hall at the Kimmel Center for the Performing Arts at Broad and Spruce Streets in Philadelphia. This event, which is underwritten by a generous grant from the Presser Foundation, will be PYO's third and final concert at the Kimmel Center in celebration of its 75th Anniversary Season. Under the direction of Maestro Louis Scaglione, this concert will open with the world premiere of a PYO-commissioned work by PYO alumnus Sheridan Seyfried. Then, Maestro Scaglione and the orchestra welcome their longtime friend, Michael Ludwig, Concertmaster of The Philly Pops, former Concertmaster of the Buffalo Philharmonic, and former Associate Concertmaster of The Philadelphia Orchestra, to the stage for a performance of Tchaikovsky's beloved Violin Concerto, Op. 35. The performance concludes with Mahler's monumental Fifth Symphony. During this event, PYO will bestow its Second Annual Ovation Award to honor an outstanding music teacher in the Delaware Valley Region. Tickets are available HERE for $15-$25 or through Ticket Philadelphia by calling 215.893.1999.