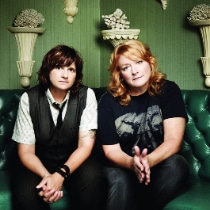 The PYO Music Institute (PYO) will take to the stage for a dynamic performance as they collaborate with Amy Ray and Emily Saliers of the Grammy Award-winning American folk rock group The Indigo Girls. As part of The Kimmel Center Presents offerings, the concert will take place on Sunday, April 12, 2015, at 7:30 p.m., in Verizon Hall at the Kimmel Center for the Performing Arts. Maestro Louis Scaglione, President and Music Director of PYO, will conduct this exciting performance. Tickets are available from $46-$70. Tickets can be purchased by calling 215-893-1999, online at kimmelcenter.org, at the Kimmel Center box office at Broad & Spruce Streets (open daily 10 a.m. to 6 p.m.).

With a legacy of hit releases and thousands of touring miles behind them, Amy Ray and Emily Saliers have forged their own musical path. Selling more than 14 million records, the Indigo Girls are the only duo with top-40 titles on the Billboard 200 chart in each of the past four decades.

They return to Philadelphia, shedding new light on their favorite songs and look forward to performing with these young musicians. While they have performed with orchestras and symphonies in the past, this is their first time with a youth orchestra. Two artists who met as youngsters in elementary school, they understand fully the significance music plays in young lives. Emily Saliers said, "We are really looking forward to playing with the PYO Music Institute. This will be our first full-length orchestra show with a youth orchestra, and we can’t think of a better choice than the PYO! We are always inspired by the passion and gift of young artists."

Maestro Scaglione looks forward to conducting this concert and bringing such a unique experience to the student musicians in PYO. He said, "We are honored to be invited by the Kimmel Center to perform with this legendary performing group. It’s a wonderful compliment to our orchestra, especially this year as we celebrate the orchestra’s 75th Anniversary. This is truly the icing on the proverbial cake!”

Anne Ewers, President and CEO of The Kimmel Center, initiated this invitation at the suggestion of her team, understanding the talent associated with the PYO Music Institute. She said, “When we were told The Indigo Girls were seeking an orchestra, we thought of this opportunity for PYO. This will be a reimagining from their typical classical repertoire, an experience I am sure they will relish.”

About The Indigo Girls

The Indigo Girls are a renowned, self-produced American folk rock duo who met in elementary school and have not stopped performing together since. They released nine albums with major record companies, but have since returned to their own label, IG Recordings Company. Both women are accomplished musicians, philanthropists, and political and environmental activists, having founded a non-profit organization that promotes independent musicians and performing for special groups and causes across the country. As active members of the LGBT community, they provide a voice and inspiration for future generations.

The organization’s flagship ensemble, PYO Music Institute (PYO), provides the most talented students with advanced orchestral training and performance opportunities throughout the concert season. There are three PYO companion ensembles, which include the Philadelphia Young Artists Orchestra (PYAO), formed in 1996; Bravo Brass, added to the program in 2003; and Philadelphia Region Youth String Music (PRYSM), created in 2007. Young musicians (ages 6–21) are selected by competitive audition and have represented the United States on five continents. PYO offers classical musical performances throughout the Greater Philadelphia region each year. In addition, the organization is a frontrunner in supporting musical education for children from Philadelphia’s most vulnerable and underserved neighborhoods through the organization’s outreach program, Tune Up Philly.