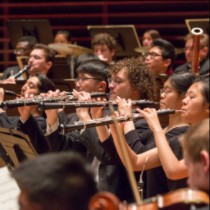 On April 3, 2016, PYO Music Institute will present its first all-ensemble festival. PYO Music Institute, Philadelphia Young Artists Orchestra, Bravo Brass, PRYSM, and Tune Up Philly will be featured on the stage of Verizon Hall during this special event. PYO will welcome a special guest host for the afternoon, as we celebrate the very best in music education.

Philadelphia Young Artists Orchestra (PYAO), under the leadership of Rosalind Erwin, opens its 21st season with a holiday concert at the Upper Darby Performing Arts Center. Season repertoire highlights include Bernstein’s Overture to Candide, Tchaikovsky’s Romeo and Juliet Fantasy Overture, Haydn’s Symphony No. 104, Hanson’s Symphony No. 2, and Copland’s Four Dances from Rodeo. The PYAO season culminates with its 21st Annual Festival Concert held in Perelman Theater of The Kimmel Center, where the winner of the second annual PYAO Young Artists Solo Competition will be featured as soloist.

Under the direction of Paul Bryan, Bravo Brass, PYO Music Institute’s all-brass ensemble — and one of only a few of its kind in the country — will present a series of concerts hosted at the historic St. Mark’s Church in Philadelphia. The programs for the coming season include: “A Holiday in Brass” (Music of the Season Arranged Uniquely for Brass); “The Glory of Gabrieli” (A Recreation of the Groundbreaking 1968 Album That Featured Brass Players from Three of America’s Great Orchestras); and “Hollywood Brass” (Music from Stage and Screen).

Philadelphia Region Youth String Music (PRYSM) and PRYSM Young Artists will return to Centennial Hall of The Haverford School for two concerts this year. Now in its 9th season and under the leadership of Gloria dePasquale, PRYSM and PRYSM Young Artists offers premium instruction to beginning and intermediate string students. Through small sectionals and large ensemble rehearsals, students gain the necessary musical foundation and technical skills required to advance through the various ensembles of the PYO organization. This season, the ensemble will perform selections from the core string orchestra repertoire, including Dvořák’s Serenade for Strings, Gershwin’s Lullaby, Arensky’s Variations on a Theme by Tchaikovsky, Anderson’s Jazz Pizzicato, and Sibelius’ Andante Festivo.\

At the launch of its 6th season, Tune Up Philly, under the direction of Paul Smith, will work with seven diverse community partners from Allegheny West to South Philadelphia to provide the benefits of El Sistema inspired programming to over 200 of Philadelphia's youth. We celebrate providing the skills our students need to enter competitive arts programming at G.A.M.P., String Theory High School, Musicopia String Orchestra, Settlement Music School, and The Primavera Fund. It is our mission to ensure that Philadelphia's great orchestral tradition remains accessible to our city's youth and their peers.