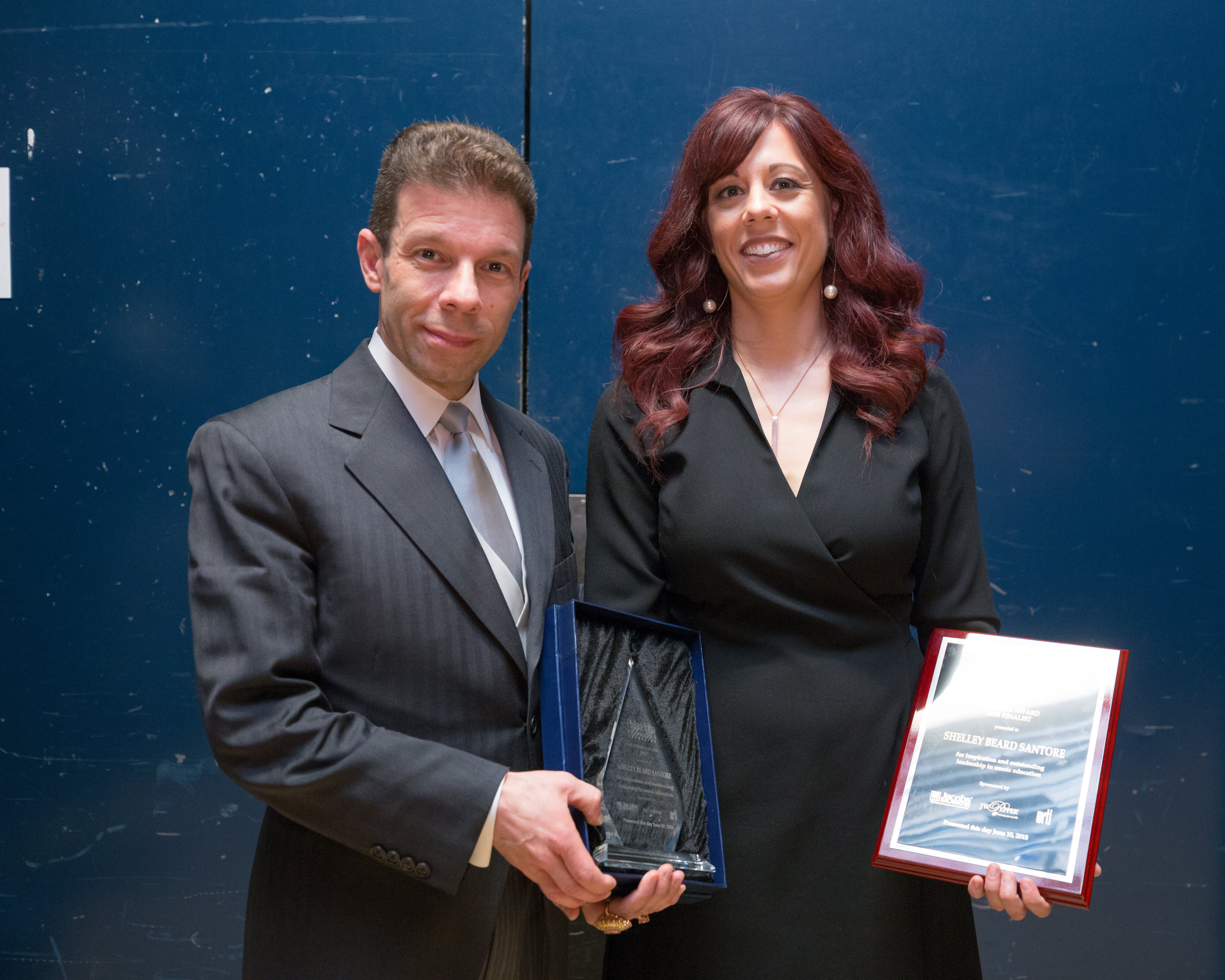 Music teacher Shelley Beard Santore, of Lansdowne, PA, the Suzuki Academy Department Head and Master Faculty member at The Music School of Delaware, had many supporters in the audience when she was named as the grand prize winner in the Fifth Annual PYO Music Institute (PYO) Ovation Award in a surprise presentation. It took place in Verizon Hall at the Kimmel Center on Sunday, June 10, 2018 at 3 p.m. during the 78th Annual PYO Music Institute Festival Concert. The PYO Music Institute’s Ovation Award for Inspiration and Outstanding Leadership in Music Education has been honoring excellence in music instruction since its inaugural year in 2014.

Beard Santore was joined by many other finalists (see below) who all received gifts and honorariums. As the grand prize winner, Beard Santore received a crystal trophy from Jacobs Music Company commemorating her award, a gift card from J.W. Pepper as well as a $1,000 honorarium from PYO. Directly after receiving the honor, Beard Santore was in a bit of disbelief that she won. “Music is a family, it’s a lifestyle. It takes the student, teacher, parents and community to really grow a great musician. It takes a village,” she said. “For me, I enjoy starting with a child when they are two or three years old, like I did with one of my nominators, Nicolette Sullivan-Cozza. You can really make the greatest difference with a child when you begin at a young age.”

Beard Santore—and nine other music teachers—served as the 10 finalists nominated by current and former students. The nominators were asked to respond to the question, “How has my music teacher changed my life?” The nominees were then reviewed by a panel of judges: representatives composed of individuals from music departments at local universities and major music institutions. The panel chose the 10 finalists, as well as Beard Santore as the grand prize winner.

Beard Santore’s two nominators, Julianna Castillo of Wilmington, DE and Nicolette Sullivan-Cozza of Hockessin, DE wrote moving essays on why they believed that their teacher should win. Sullivan-Cozza said, “In 2006, when I was just 3 years old, two life-impacting events happened to me. I met the music teacher who would stick with me for life and nurture me into the musician I am today and I was diagnosed as bring on the autism spectrum. While these two things seem unrelated, they are tied closely together, for it is my teacher, Shelley Beard Santore, who helped me learn about music, discover my passion for viola, and, most of all, overcome my disabilities. Soon after my diagnosis my mom desperately looked for resources and therapies that would help me. While I received multiple types of therapy, what I believe contributed most was learning the viola from my teacher, Mrs. Shelley. She never shied away from my quirks, and issues, and never gave up on me. As she taught me the viola she would also teach me other skills such as how to maintain eye contact, how to communicate effectively, how to maintain focus, and how to stay flexible. Most of all, Mrs. Shelley gave me my passion, and my voice. Because of her, I have known the joys of playing a concerto with an orchestra, being in a group class, and playing viola in the PYO Music Institute alongside 10 of her other current and former students. If it wasn’t for her, I wouldn't be the same person I am today. There are no words that can-do justice to what she has done for me.”

Castillo was equally eloquent. “Even though I have studied with Shelley Beard-Santore for only two years, she has had a profound impact on my musical life since I started playing violin, eleven years ago. Mrs. Beard Santore is a dynamic teacher whose work hours extend far beyond her studio. Her encouragement of my passion for music guided me to continue my studies on viola. I was accepted to the PYO Music Institute, the Settlement Music School Advanced Study Program, and the Perlman Music Program (all within my second year of viola) thanks to her mentorship. Beyond teaching, Mrs. Beard Santore spends hours of her personal time arranging additional opportunities for her students. I am deeply indebted to Mrs. Beard Santore for creating an environment that fostered my early love of music through performance and a stimulating community, as well as for her guidance of my development as her student. She has changed my life through her community leadership, dedicated teaching, and tireless search for opportunities for her students.” Castillo and Sullivan-Cozza each received $250 for being the nominator of the grand prize winner.

The PYO Ovation Award honors music teachers in the Delaware Valley who not only successfully teach music to their students, but also instill confidence in them. The award is sponsored by J.W. Pepper, Jacobs Music Company with WRTI-90.1 as a partner. After WRTI’s Jack Moore announced Beard Santore as the winner on stage, the PYO Music Institute performed its concert. The concert was conducted by Maestro Louis Scaglione and featured the World Premiere of Manhattan Nights by Kevin Day, who is the Second Annual Young Composers Competition Winner, A Salute to Leonard Bernstein with Symphonic Dances from West Side Story and Strauss’ Ein Heldenleben, Op. 40. The program finished with an encore performance of Leonard’s Bernstein’s Overture to Candide.

Beard Santore and the other nine finalists were invited to watch the PYO 78th Annual Festival Concert after the completion of the Ovation Award ceremony. The list of the admirable 2018 finalists includes:

As an active chamber musician, Shelley Beard Santore was a former and founding member of both the Tononi Quartet and the prize-winning Mühlenberg Piano Quartet. As a member of these ensembles, Ms. Beard Santore has performed at numerous concert venues including The Julliard School, The Curtis Institute of Music, Peabody Conservatory, Westminster Choir College, the Samuel Barber International Chamber Music Festival at Westchester University, Temple University, Ramapo College, Wesley College, An Die Musik (Baltimore), Ursinus College, and for the Pottstown Symphony Chamber Music Series. Chamber music collaborations include performances with members of the Minnesota and Cleveland Orchestras, the Opera Company of Philadelphia, and at summer music festivals including Aspen Music Festival, International Festival-Institute at Round Top, and Credo Chamber Music Institute at Oberlin Conservatory. Ms. Beard Santore is currently the Suzuki Academy Department Head and Master Faculty member at The Music School of Delaware. She has served as Vice President of the Greater Philadelphia Suzuki Association and former President of the Philadelphia Viola Society. Ms. Beard Santore is a graduate of the Peabody Institute (BM) and Indiana University School of Music (MM) and has extensive Suzuki Teacher Training. Her mentors include David Holland, Victoria Chiang, and Mimi Zweig. Ms. Beard Santore's students have placed and won top prizes in many classical and folk competitions including the American Viola Society solo and ensemble competitions; the ASTA Eclectic Strings solo and ensemble competitions; the Tri-County Concerts solo and ensemble competitions; various orchestral concerto competitions including Kennett Symphony, Lansdowne Symphony, Newark Symphony, and the Wilmington Community Orchestra; and have been accepted to some of the finest musical institutions including The Juilliard School, Cleveland Institute of Music, Peabody Conservatory, Oberlin Conservatory, Aspen Music Festival, and Interlochen Arts Academy, etc. Ms. Beard Santore has received the Suzuki Association of the America's Certificate of Achievement, was a finalist twice for the PYO Music Institute's Ovation Award, and most recently was awarded the American Viola Society's Maurice W. Riley Award for "creative teaching and enduring commitment to excellence in viola education". She has been published in Strings Magazine and the American Suzuki Association's Journal on numerous occasions and has taught/guest lectured at the following: Westminster Choir College, University of Delaware, Gettysburg College, Eastern University, and Ursinus College.