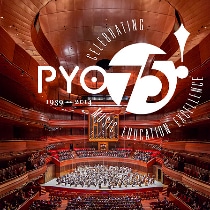 The PYO Music Institute (PYO) organization is celebrating an amazing milestone: It has been educating and inspiring the tri-state region's most talented and promising music students for 75 years.

“We take pride in knowing that the PYO Music Institute organization is playing a pivotal role in these students' lives,” says PYO President and Music Director Louis Scaglione. “Not only are we preparing these students for successful university and conservatory experiences, but we are also laying the groundwork for future life accomplishments.”

Frank Giordano, PYO Chairman of the Board, takes a proud view of the 75th Anniversary season and the incredible growth that has taken place since Scaglione has been at the helm. Giordano said, “We are most grateful to Maestro Scaglione for the talent he has brought to PYO since he began in 1997. From the outstanding leaders of each ensemble division to the diversity of programming we are now offering, we provide the finest music education to children and young adults from all demographics, truly fulfilling our mission of educating and enriching young musicians from all walks of life.”

Maestro Louis Scaglione is PYO's fifth and current Music Director, President, and CEO, who has transformed PYO  into a nationally recognized, professionally managed institution.  He has taken the PYO on many international concert tours. Destinations have included The 1998 World Youth Music Forum in Moscow; the Czech Republic and Italy (2000); China (2002); eastern and central Europe (2004); and a tour of Brazil (2007), where they performed to sold-out venues in São Paulo and Rio de Janeiro. A former member of the board of the League of American Orchestras, Maestro Scaglione was elected by his peers in 2006 to serve as Chairman of the Youth Orchestra Division Board.