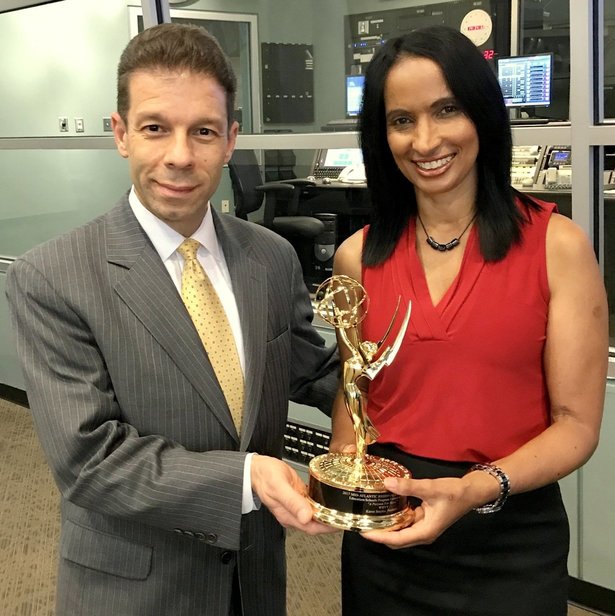 Maestro Louis Scaglione, President and Music Director of the PYO Music Institute (PYO), is thrilled for WHYY-TV Producer Karen Smyles, who received the 2017 Mid-Atlantic Regional Emmy® award for a program about PYO. The Emmy Awards® are presented by the National Academy of Television Arts & Sciences each year. Smyles’s feature entitled “A Passion for Music” was recognized in the education/schools program feature or segment category. It appeared on WHYY’s “Friday Arts” program.

Smyles was very gracious on accepting the award and credited PYO Music Institute on her acceptance. In more detail, she explained, “The reason it was nominated is because they all did such a good job of representing the orchestra in the segment. I really was very impressed with the maturity of all the young musicians!” Scaglione was delighted that PYO was selected for a “Friday Arts” feature and, even more now, realizing the impact the story may have had. “Karen Smyles made the production of this story so easy for us. She is a brilliant producer – creative, detail-oriented, resourceful and does it all with such kindness and warmth. Our students were very comfortable with her and her crew.” He added, “Plus, the attention we have received from this coverage has been outstanding, and now, with the Emmy Award, we imagine even more people will learn about our extensive music education program. We are very appreciative.”

“A Passion for Music” covered all six ensemble programs of PYO that are designed to meet specific needs and experience levels of students selected through a competitive audition process. All the directors of the ensembles were featured and student performances and rehearsals were included in the feature. Perhaps, the highlight was hearing firsthand from the students the passion they feel for classical music.

Now in its 78th year of training tomorrow’s leaders, the renowned PYO Music Institute organization is one of the nation’s oldest and most respected community music education and youth orchestra performance programs, providing talented young musicians from across the tri-state area with exceptional musical training. Students go on to excel in many diverse fields, and it is with pride that PYO Music Institute notes that many members of the prestigious Philadelphia Orchestra are alumni. For more information, please visit www.pyos.org.

Leading public media provider WHYY won five Emmys at this year’s Mid-Atlantic Emmy Awards held Saturday, September 9, 2017. Arts, culture and entertainment magazine Friday Arts won awards (3) in the “Outstanding Magazine Program,” “Outstanding Education/Schools Program Feature or Segment,” and “Outstanding Health/Environment/Science – Program Feature Segment” categories. Articulate with Jim Cotter, which delves into stories from where life meets art, also picked up a win for best “Historic/Cultural Program Feature/Segment.” WHYY TV executive producer Trudi Brown and former WHYY cameraman Eric Sennhenn won an “Outstanding Documentary” award for “The Pursuit: 50 Years in The Fight for LGBT Rights.” Brown was also inducted into the Mid-Atlantic National Academy of Television Arts and Sciences’ Silver Circle Society for her longtime service in the industry. Friday Arts is a 30-minute arts, culture and entertainment magazine that features three distinct stories about the arts and the artists in our area. Friday Arts casts a light on some of Philadelphia's best-kept secrets in the arts. The program is broadcast on WHYY-TV Fridays at 8:30 p.m., Saturdays at 10:30 p.m. and 11:30 a.m. Sundays.