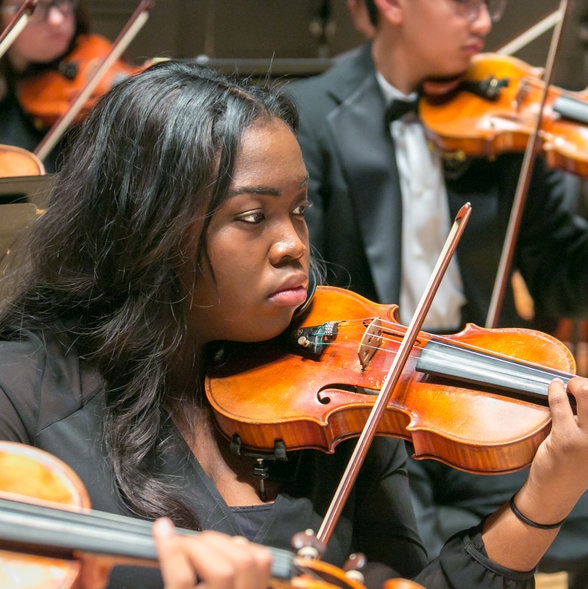 PYO Violinist, Akili Farrow, To Be Featured on NPR's 'From The Top'

NPR’s hit show From the Top, the preeminent showcase for young musicians heard weekly on WRTI 90.1 FM (Sundays at 3PM), will come to the Open Air Theatre at Longwood Gardens to record a radio broadcast on Sunday, September 9 at 7:30 PM. Special guest host pianist Peter Dugan will accompany and interview extraordinary young classical musicians from across the country in this 90-minute concert recording. Presented by Longwood Gardens, tickets are available at longwoodgardens.org.

Akili Farrow (violin), a resident of Southwest Philadelphia, will be performing Sonatensatz in C Minor by Johannes Brahms (1833-1897), with pianist Peter Dugan. She is a graduate of Philadelphia Performing Arts, a String Theory Charter School who is attending Royal College of Music in London in the fall. She was an active member of PYO Music Institute, performing frequently in Verizon Hall in the Kimmel Center, and this summer she was one of the talented musicians selected for the National Youth Orchestra (NYO), performing in Carnegie Hall and throughout Asia on tour with NYO.

Angeline Ma (piano) lives in Berwyn, PA where she is a junior at Conestoga High School. On the From the Top recording, she'll perform Waltz in F major, Op. 34 no. 3 and Waltz in A flat major, Op. 42 by Frédéric Chopin and I. Prelude from Eight Concert Études, Op 40 by Nikolai Kapustin. A piano student of Susan Starr, Angeline has won prizes in many competitions. She has performed at the Polish Embassy in Washington, D.C. as a prizewinner in the Kosziuszko Foundation Chopin Competition.

Faustina Housner (violin) is a high school senior from Cherry Hill, New Jersey and will perform Histoire du Tango: Cafe 1930 by Astor Piazzolla with 18-year-old guitarist Ria Modak from New York, New York. She studies violin at Temple Music Prep with Ellen dePasquale and J Freivogel. Faustina performs with Temple Music Prep’s Youth Chamber Orchestra and had the memorable experience of performing a solo for Iceland’s president while on tour with the group. She was named an Honorable Mention winner by the National Young Arts Foundation. She, as well as Akili, was selected for Carnegie Hall’s National Youth Orchestra of USA who has is honored to tour Asia with the NYO musicians.

Guest host Juilliard-trained pianist Peter Dugan is equally at home in classical, jazz, and pop idioms.  His debut last year with Michael Tilson Thomas and the San Francisco Symphony was described by the Los Angeles Times as “stunning.” As a founding creator and the pianist for OPERAtion Superpower, a superhero opera for children, he has traveled to dozens of schools in the greater New York area, performing for students and encouraging them to use their talents – their superpowers – for good. Originally from Upper Darby, Pennsylvania, Dugan first appeared on From the Top at age 18 at a taping at the Kimmel Center for the Performing Arts.

Broadcast on more than 220 stations nationwide to an audience of nearly half a million listeners, From the Top is the most popular weekly one-hour music program on public radio. Young performers share their passion for classical music, and speak about their non-musical lives, from career goals and family traditions to hidden talents, school, and community life. From the Top appeals to diverse audiences,  but is especially suited for ages 7 and up.

The Boston Globe calls From the Top, “entertaining, accessible, and inspirational.”

Support for this recording of From the Top is made possible by Patti and Chip Wilson.