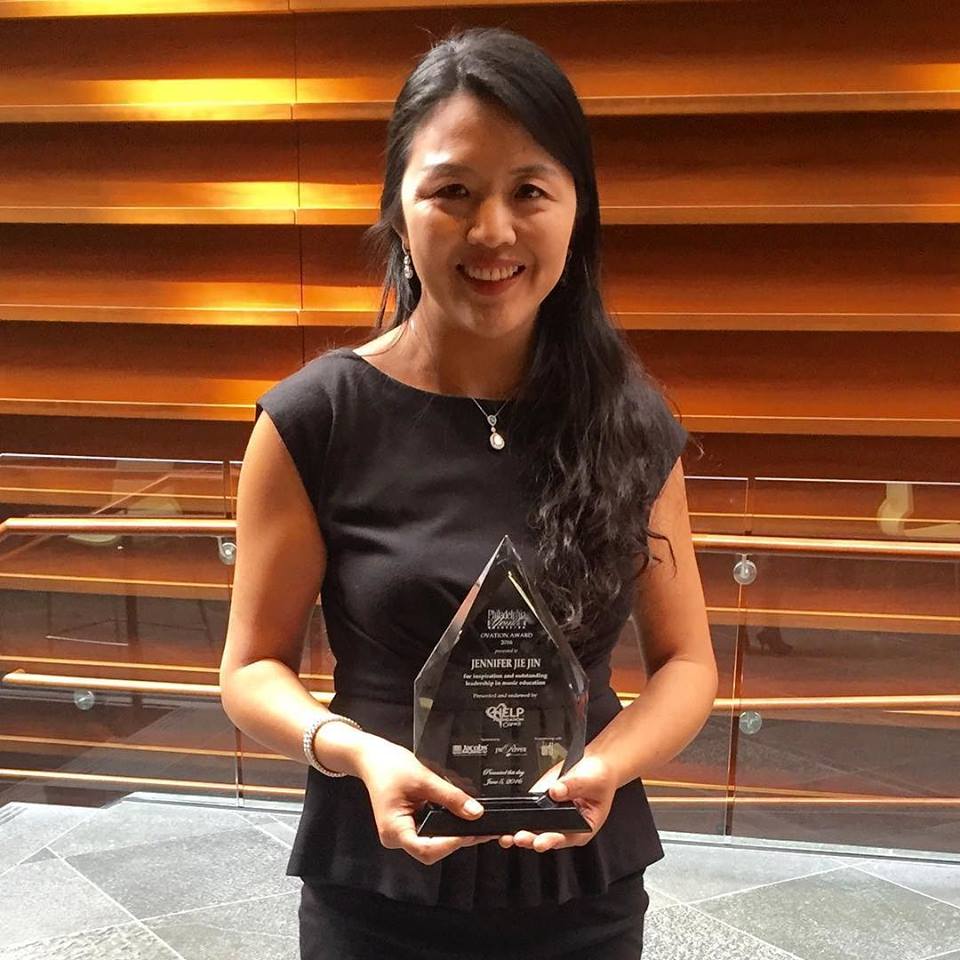 “I was extremely happy to be a finalist and I am so surprised to be recognized for this honor that is a tribute to all music educators who work tirelessly and passionately each and every day. I know that music is more than an interest or hobby. It has a significant impact on all of life as it builds self-esteem, cultural awareness and the desire to achieve.”

Jin was one of 10 music teacher finalists nominated by current and former students. Nominators were asked to respond to this question … “How has my music teacher changed my life?” Jin’s nominator was Jessica Zhang, her private cello student who plays cello in the Philadelphia Young Artists Orchestra (PYAO), an ensemble division of PYO. In her winning essay she wrote, “Mrs. Jin is a super teacher.

My cello skill improved quickly under her mentorship. At the end of my first year of studies with Ms. Jin, I found out with surprise that the location of the studio recital was in a retirement living facility. I asked her why. She smiled and did not answer directly. She only said, “You will see.” When I took the stage I looked at my audience before I started. They were old and lonely people, some even in a wheelchair. They all looked at me with love, like looking at their grandchild. When I played, even made a mistake, they all smiled at me. I suddenly understand why we were here to play. I was very proud that I was one of the kids that provided these seniors one night of fun. I participated in that recital every year and now know I can serve my community with my cello and talent.”

The PYO Music Institute’s Ovation Award for Inspiration and Outstanding Leadership in Music Education was created to honor music teachers in the Delaware Valley who not only teach, but help build character and confidence for a lifetime. It is presented and endowed by the H.E.L.P Foundation and sponsored by Jacobs Music Company and J.W. Pepper with partner WRTI 90.1. A blue ribbon panel of music experts from local universities and institutions chose the 10 finalists and the grand prize winner. The presentation took place at the PYO Music Institute’s 76th Anniversary Festival Concert at Verizon Hall, an event that showcased the incredible talent of the organization's young students.

Jin and the other nine finalists were invited to the PYO’s season finale concert at Verizon Hall, where they were recognized on stage by the award’s sponsors: Gary A. Frank, PYO board member, CEO of H.E.L.P.® Foundation and LCG, Ltd.; Chris Rinaldi, President of Jacobs Music Company; Denise Collins of J.W. Pepper; WRTI’s Jack Moore, who served as host of the award presentation; and Maestro Louis Scaglione, President and Music Director of the PYO. Jin was presented with a signifcant cash prize from H.E.L.P. Foundation, a crystal tribute trophy from Jacobs Music and a substantial gift card from J.W. Pepper. All of the finalists received gifts and plaques and Jessica Zhang, the nominator of Jennifer Jie Jin, was also presented with a gift card for her efforts.

Maestro Scaglione was thrilled with the selection of all of the participants and is proud that this award, launched in 2014, will continue to serve as an important platform on which PYO can highlight the vital role of music education in our culture. As the artistic and administrative leader of the PYO, one of the nation’s leading youth orchestra institutions and the area’s oldest and most respected orchestral preparatory organization, Scaglione is keenly aware of the enormous influence music educators have on all aspects of their students’ lives. He said, “We received so many testimonials from grateful students whose teachers taught them self-confidence, commitment, and life skills that reached far beyond the classroom or studio, similar to our goals at PYO Music Institute.

We believe it is important to bring positive attention to these wonderful mentors and to applaud them for their contribution to the education system and to our society.”

About Jennifer Jie Jin:
A committed cello teacher, Jennifer Jie Jin is the Co-Director of Chamber Strings Summer Music Festival, Vivace Music Competition and Vivace Orchestra. She is also the director of Honor String Ensemble at Archbishop John Carroll High School. Jin has coached her students to win top prizes in many competitions. She is currently a member of Delaware Symphony Orchestra and the Pyxis Piano Quartet (Resident Ensemble at Delaware Art Museum for the past seven seasons) and is proud to have performed for Vice President Joe Biden at the museum.

Jin began her cello study at age 5. She received her Bachelor’s degree from Shanghai Conservatory of Music. Upon receiving a full scholarship from Shepherd School of Music at Rice University, she came to the United States and studied with Prof. Norman Fischer for her Master’s degree. Jin also received the Artist Diploma at the Cleveland Institute of Music, where she studied with Mr. Desmond Hoebig. She is the proud mother of two children with her husband, Robin Li.