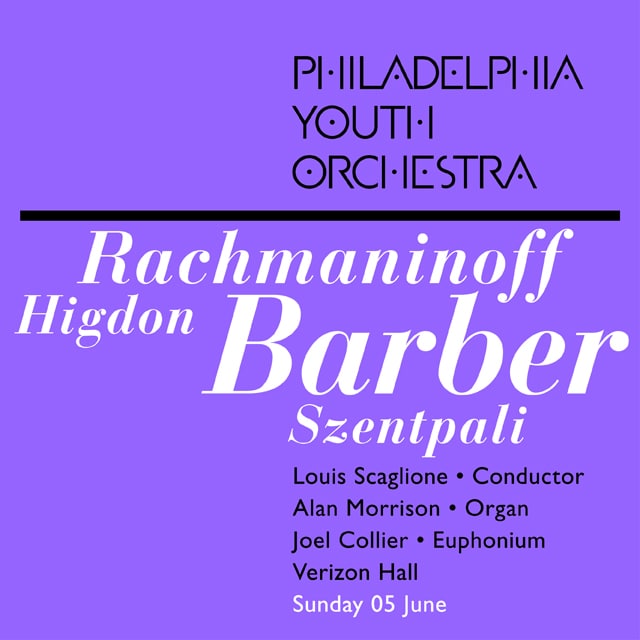 After a truly inspiring year of music education and performance, the curtain will soon rise on the final concert of the PYO Music Institute's 2015-16 season, marking the organization's 76th Anniversary. The PYO Music Institute 76th Annual Festival Concert will feature performances by PYO's students, ages 14-21, and special guest performances by organist Alan Morrison and Bravo Brass Alum and Euphonium soloist Joel Collier. The concert will take place on Sunday, June 5, at 4:00 p.m., in Verizon Hall at the Kimmel Center for the Performing Arts.

Prior to the concert, there will be a presentation of the PYO Music Institute’s 3rd Annual Ovation Award for Inspiration and Outstanding Leadership in Music Education. The award was created to honor the outstanding music teachers in the Delaware Valley who not only impart musical knowledge but help shape the lives of their students beyond the studio and stage.  Ten finalists chosen by a blue ribbon panel of music experts will be recognized at the concert, and the grand prize winner will be announced by WRTI’s Jack Moore. The Ovation Award is presented and endowed by H.E.L.P.® Foundation and sponsored by Jacobs Music Company, J.W. Pepper, and WRTI-FM.

Maestro Louis Scaglione has programmed a concert of works that premiered in Philadelphia. The performance opens with Samuel Barber's Toccata Festiva, featuring guest soloist Peter Richard Conte, Grand Court Organist of the Wanamaker Organ. This work was premiered by The Philadelphia Orchestra in 1960. Next on the program, PYO welcomes Joel Collier, Bravo Brass alumnus, to present the U.S. premiere of Symphony Concertante by Roland Szentpali. This work uniquely features the Euphonium as the solo instrument. After intermission, the orchestra and Maestro Scaglione perform Blue Cathedral by Pulitzer Prize winner and Philadelphia-based composer Jennifer Higdon. This work was premiered by The Curtis Institute of Music's orchestra in 2000. This performance concludes with Sergei Rachmaninoff's Symphonic Dances, a work premiered by The Philadelphia Orchestra in 1941.

Maestro Scaglione looks forward to this milestone event with great pride and anticipation. “This performance and the presentation of the Ovation Award will mark the culmination of a very special 76th Anniversary for the PYO Music Institute,” Scaglione explains. “We are so pleased to welcome our friends, outstanding organist Peter Richard Conte and Bravo Brass alumnus Joel Collier, to take part in this special event.”

In 2002, Alan Morrison was appointed head of the organ department at the world renowned conservatory, The Curtis Institute of Music, where he holds the Haas Charitable Trust Chair in Organ Studies.  In 2006 he joined the faculty of Westminster Choir College of Rider University and has served as College Organist at Ursinus College in Collegeville, PA since 1995.  Most recently he was appointed Organist-in-Residence at the renowned Spivey Hall at Clayton State University in Georgia.  A graduate of both the Curtis Institute of Music (BMus in Organ and MMus in Piano Accompanying) and Juilliard School of Music (Professional Studies in Organ), his teachers were Sarah Martin, Cherry Rhodes and John Weaver (organ) and Robert Harvey, Vladimir Sokoloff and Susan Starr (piano).

Now in its 76th year, the renowned PYO Music Institute organization, led by President and Music Director, Maestro Louis Scaglione, is one of the nation’s oldest and most respected community music education and youth orchestra performance programs, providing talented young musicians from across the tri-state area with exceptional musical training. Students go on to excel in many diverse fields, and it is with pride that PYO Music Institute notes that many members of the prestigious Philadelphia Orchestra are alumni.  The organization is comprised of five independent program ensembles designed to meet specific needs and experience levels of students selected through a competitive audition process. The anchor group is the PYO Music Institute (PYO), conducted by President and Music Director Louis Scaglione, featuring 125 gifted instrumentalists who range in age from 14-21. Young musicians 12-18 years old are featured in PYO’s companion ensemble, the Philadelphia Young Artists Orchestra, which is led by Director and Conductor Maestra Rosalind Erwin, who is Music Director and Conductor of Drexel University Orchestra. Bravo Brass, directed by Curtis Institute Dean of Faculty and Students, Paul Bryan, is an all brass ensemble for promising middle and high-school instrumentalists. PRYSM (Philadelphia Region Youth String Music) and PRYSM Young Artists ensembles provide string large ensemble and sectional master class instruction for beginning and intermediate musicians ages 6-14. The director and conductor of PRYSM is Gloria DePasquale, cellist with The Philadelphia Orchestra, and conductor of PRSYM Young Artists is Jessica Villante. Tune Up Philly (TUP) is PYO’s engagement program, directed by Paul Smith, that focuses on the creating and inspiring true community by providing children in underserved communities with invaluable opportunities to learn and perform a differentiated orchestral music curriculum.  www.pyos.org.