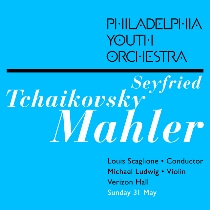 After a fulfilling year of music and inspiration, the curtain will soon rise on the final concert of the PYO Music Institute's 2014-2015 season, marking the organization's 75th Anniversary. The PYO Music Institute 75th Annual Festival Concert — which will feature performances by PYO's students, ages 14-21, and a special guest performance by world-renowned violinist Michael Ludwig — will take place on Sunday, May 31, at 3:00 p.m., in Verizon Hall at the Kimmel Center for Performing Arts, 300 S. Broad Street, Philadelphia.   This performance is generously underwritten by The Presser Foundation in celebration of The Presser Foundation’s 75th Anniversary.

Prior to the concert, there will be a presentation of the PYO Music Institute’s 2nd Annual Ovation Award for Inspiration and Outstanding Leadership in Music Education. The award was created to honor the outstanding music teachers in the Delaware Valley who not only impart musical knowledge but help shape the lives of their students beyond the studio and stage.  Ten finalists chosen by a blue ribbon panel of music experts will be recognized at the concert, and the grand prize winner will be announced by WRTI’s Jack Moore. The Ovation Award is presented and endowed by H.E.L.P.® Foundation and sponsored by Jacobs Music Company, J.W. Pepper, and WRTI-FM.

Under the direction of Maestro Louis Scaglione, this concert will showcase the world premiere of Across the Sky, an 8-minute dramatic and multi-faceted commissioned work by PYO alumnus Sheridan Seyfried; Tchaikovsky’s Violin Concerto — widely considered one of the most technically difficult works for the violin — performed by Ludwig, Concertmaster of The Philly Pops, former Concertmaster of the Buffalo Philharmonic, and former Associate Concertmaster of The Philadelphia Orchestra; followed by Gustav Mahler’s monumental Fifth Symphony.

Maestro Scaglione looks forward to this milestone event with much pride and anticipation. “This performance is the culmination of a very special 75th Anniversary for the PYO Music Institute,” Scaglione explains. “We are pleased to welcome back outstanding violinist and my close friend, Michael Ludwig, as guest artist and to also perform the world premiere of a composition written by one of our former students. This will be an extraordinary musical event that will showcase our 75th Anniversary.”

The PYO Music Institute 75th Annual Festival Concert is underwritten by a generous grant from The Presser Foundation. Tickets, priced at $15-$25, may be purchased online. For more information, call 215.893.1999.