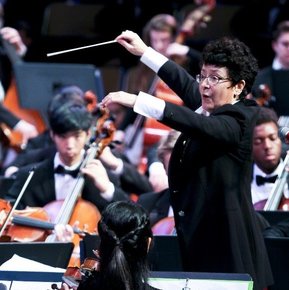 The Philadelphia Young Artists Orchestra (PYAO) will present its 24th Annual Festival Concert on Sunday, May 12, 2019 at 3 p.m. The concert will be held in the Perelman Theater at the Kimmel Center for the Performing Arts, 300 S. Broad Street, Philadelphia. Conducted by Maestra Rosalind Erwin, the concert will feature the winner of the Fifth Annual Young Artists Solo Competition winner, Vibha Janakiraman. Vibha, who placed first in the competition out of more than a dozen applicants, will perform the third movement of Wieniawski’s Second Violin Concerto and receive a $500 scholarship award from PYO.  She is an 8th grade student at PA Leadership Charter School.  PYAO will also perform Chabrier’s España and Shostakovich’s Fifth Symphony.

Maestra Erwin, who is also Conductor and Music Director of Drexel University Symphony Orchestra, looks forward to this final PYAO concert of the 2018/2019 season. She said, “This concert is the culmination of a season of wonderful performances. I am greatly impressed with the effort shown by this group and know that they will be successful beyond their time in PYAO.”

Vibha Janakiraman, age 13, started studying violin at age 6 with Jessica Hoffman at The Music School of Delaware. Since the summer of 2016, she has been studying with Lee Snyder at the Settlement Music School. An 8th grader at the PA Leadership Charter School (PALCS) University Scholars Program, Vibha is currently the concertmaster of the Philadelphia Young Artists Orchestra (PYAO). She played in the Delaware Youth Symphony Orchestra (2015-2017) and the Philadelphia Region Youth String Music Young Artists (PRYSM-YA) Orchestra (2014-2015), serving as concertmaster in the latter. She also performed as a soloist with the Wilmington Community Orchestra as a winner of the 2017 Delaware Concerto Competition for Young Musicians and was the winner of the 2018 Tri-county youth competition’s junior strings division. She was a recipient of the 2018 Estella Hillersohn Frankel Scholarship awarded by the Music School of Delaware. Vibha is the violinist of the Gray Charitable Trust Advanced Study Piano Trio coached by Sandra Carlock at Settlement Music School. She has also been a member of the PMAY Arts Initiative since 2017, and will be attending the 2019 Young Artist Summer Program at the Curtis Institute of Music.