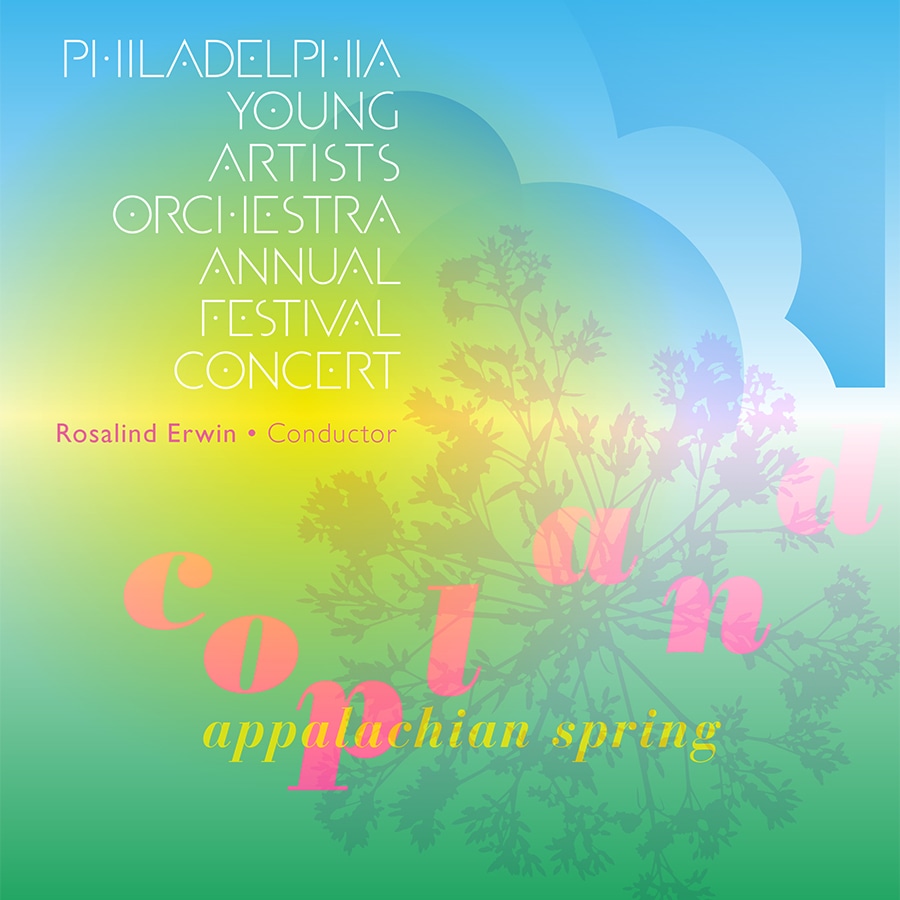 Purchase Tickets at this LINK.

On Sunday, May 13, 2018 at 3 p.m. the Philadelphia Young Artists Orchestra (PYAO) members, ages 12 to 18, will present its 23rd Annual Festival Concert. The concert will be held in the Perelman Theater at the Kimmel Center for the Performing Arts, 300 S. Broad Street, Philadelphia. Conducted by Maestra Rosalind Erwin, the concert will feature the winner of the Fourth Annual Young Artists Solo Competition winner, Lea Wang, violinist. Wang, who placed first in the competition out of more than a dozen applicants, will perform Pablo de Sarasate’s Zigeunerweisen (“Gypsy Airs”) and receive a $500 scholarship award from PYO.  She resides in Holland in Bucks County, PA and is an 8th grade student at Holland Middle School.

The program will also include Aaron Copland’s “Appalachian Spring” and Antonín Dvořák’s Symphony No. 9, “From the New World.”

Maestra Erwin, who is also Conductor and Music Director of Drexel University Orchestra, looks forward to this final PYAO concert of the 2017/2018 season. "Each spring, I am impressed by the musical sophistication and technical facility gained by PYAO students over the course of the year. The Festival Concert will be yet another example of PYAO's excellent work; I could not be prouder of this group of young musicians."

About Lea Wang
Lea Wang is Co-Concertmaster of PYAO and is a distinguished honors student. She began studying piano at age four and violin at age six. In addition to being with PYAO, she served as the Concertmaster of the Bucks County Music Festivals in both 2017 and 2018. Lea won first place in the Bucks County Symphony Orchestra’s (BCSO) 2017 Youth Solo Competition and is the recipient of the Jeanne Marvin Phillips Prize. She soloed with the BCSO in its December 2017 concert. She is also the recipient of the 2017 Marie Paxson Fund Prize presented by the Delaware Valley Music Club and soloed in its Young Performers Concert in March 2018. Lea spent the summer of 2017 at the Boston University Tanglewood Institute, playing as the first violinist in a string quartet and serving as the concertmaster of the String Intensive Orchestra. In the summer of 2016, she attended the advanced chamber music program at Point CounterPoint music camp in Vermont, playing in a piano trio (as a violinist) and a quartet (as a pianist). Lea was a Silver Medalist at the 2016 Pennsylvania Math 24 Tournament and a 2016 Pennsylvania State Finalist in the National Geographic Bee.  She placed first at the 2017 Pennsylvania Junior Academy of Science Fairs at both the regional and state levels. She enjoys reading, swimming, coding, and traveling the world.