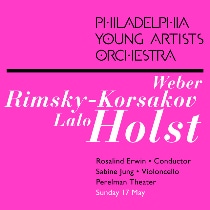 The 20th Annual Festival Concert will take place on Sunday, May 17, 2015, at 3 p.m. in the prestigious Perelman Theater at the Kimmel Center for the Performing Arts, Broad and Spruce Streets, Philadelphia. For the young student musicians, members of the esteemed Philadelphia Young Artists Orchestra (PYAO) ensemble of the PYO Music Institute Organization, it's both a very busy and rewarding time of year as they prepare to perform a selection of intricate orchestral works.

Esteemed conductor Rosalind Erwin will lead these accomplished young musicians through a program that begins with Carl Maria von Weber's Overture to Oberon, the colorfully rich opening to the composer's 10th opera and last major work; followed by the Ballet Music to Gustav Holst's comic opera, The Perfect Fool; and the first movement from Édouard Lalo’s Violoncello Concerto in D Minor performed by PYAO cellist Sabine Jung, winner of the inaugural Young Artists Solo Competition; ending with Nikolai Rimsky-Korsakov's Capriccio espagnol, a work that is inspired by Spanish folk melodies and praised as a masterpiece of orchestral instrumentation.

“We are so proud of Sabine and the entire PYAO ensemble,” enthuses Maestro Erwin. “We look forward to showcasing our students' accomplishments, and we commend them for their hard work and dedication all throughout the 2014-15 season.”

Sabine Jung, age 14, is an eighth grader at Charles F. Patton Middle School in West Chester, PA, and is currently under the tutelage of Priscilla Lee, principal cellist of Opera Philadelphia. Open to current members of PYAO, the Young Artists Solo Competition was created in 2014 to reward superior artistic and musical achievement. Selected as the winner by a panel of three distinguished professional musicians, Sabine receives a cash prize and the honor of performing one movement of a solo concerto with the PYAO in concert.