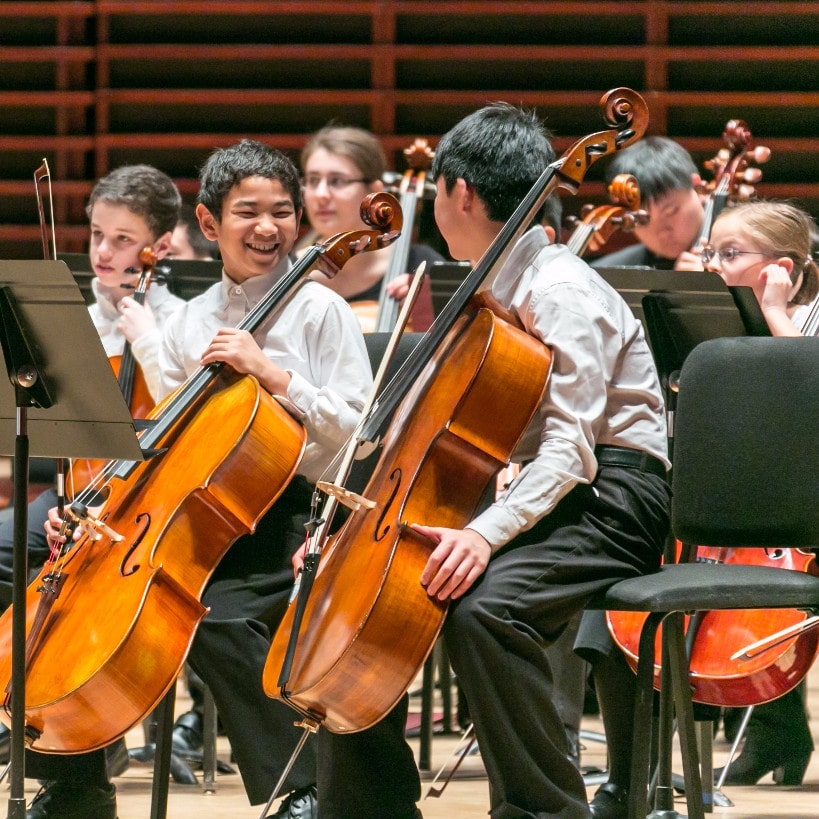 The gifted young violin, viola, cello and bass players in the string ensembles of PYO Music Institute -- PRYSM (Philadelphia Region Youth String Music) and PRYSM-YA (PRYSM Young Artists) -- raise their bows for the final performance of the season at the 9th Annual PRYSM Festival Concert. It will be held on Saturday, May 14, 2016 at 3 p.m. in Centennial Hall at the Haverford School in Haverford, PA.  Both PRYSM ensembles, directed by Gloria dePasquale, a cellist with the Philadelphia Orchestra, form the all-string branch of the highly regarded PYO Music Institute (PYO) organization led by President and Music Director Louis Scaglione. PRYSM musicians are conducted by dePasquale and PRYSM Young Artists are conducted by Jessica Vallante. General admission tickets are $15, free for children 13 and under.

The audience will be treated to a phenomenal string symphony designed to highlight skills these talented young instrumentalists, ages 6-16, have been honing since rehearsals began in September. The PRYSM program offers the region’s highest level of orchestral string instruction from the area’s most respected professional string musicians and educators. The Festival’s musical program consists of actual works from the core string repertoire performed by PRYSM and professionally arranged works for PRYSM YA. The concert reflects the challenging repertoire practiced all year by the two ensembles.  Selections include Gershwin’s Lullaby, Dvořák’s Serenade for Strings in E Major, Op. 22 and the Rutter Suite for Strings. In a side by side performance, they will play Nimrod from the Elgar Enigma Variations.

Gloria dePasquale commented on this season’s students, “PRYSM and PRYSM YA string orchestras provide students with a unique model of learning with equal parts of instruction and inspiration from a dedicated professional staff and accomplished interns from the PYAO and PYO. The orchestras are places where the students grow their technical, musical, and ensemble skills and grow their relationships with musicians across the age spectrum. The result is magical music making, illustrating ensemble work at its finest.”

About PRYSM and PRYSM YA:  Philadelphia Region Youth String Music (PRYSM) was created in 2007 by the PYO Music Institute organization with renowned string musicians Gloria and William dePasquale of The Philadelphia Orchestra as a preparatory large string ensemble program to build the skills and knowledge of young string musicians who aspire to eventually join the PYO Music Institute’s string sections. Since its inception and as a result of the caliber and wealth of repertoire offered, PRYSM has become the area’s most respected string training program, attracting aspiring young string musicians from throughout the greater Philadelphia region.  PRYSM YA is designed for younger children, beginning at age 6, who are starting to learn fundamental musicianship and string techniques. PRYSM and PRYSM YA are under the direction of Gloria dePasquale.