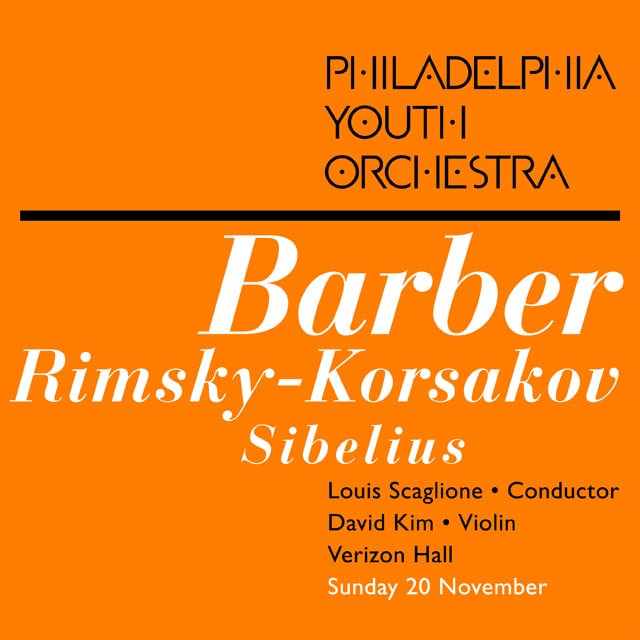 PYO Music Institute’s (PYO) gifted young musicians present their first concert this season in Verizon Hall at The Kimmel Center conducted by PYO President and Music Director Louis Scaglione. The concert includes a special guest appearance by Concertmaster of The Philadelphia Orchestra David Kim performing the Violin Concerto by Jean Sibelius with the orchestra. The concert takes place on Sunday, November 20, at 3 p.m.

With 120 talented musicians, age 14 to 21, the orchestra will open the program with Barber’s Overture to The School for Scandal followed by Sibelius’s Violin Concerto and will conclude with Rimsky-Korsakov’s Scheherazade.

Scaglione, celebrating his 20th year with PYO this season, is honored to have Mr. Kim as a special guest for this performance. He said, “Mr. Kim has been such an enthusiastic supporter of our students and to have him perform with him is an experience that will become a lifelong memory. Mr. Kim is not only one of the most accomplished violinists in the country, he is a an impassioned teacher who enjoys teaching and inspiring young musicians.”

Mr. Kim appears as soloist with The Philadelphia Orchestra each season, as well as with numerous orchestras around the world. He also appears internationally at such festivals as Grand Teton, Brevard, MasterWorks (US), and Pacific (Japan). Highlights of Mr. Kim’s 2015-16 season include teaching/performance residencies at Oberlin College, Bob Jones University, and the Boston Conservatory; continued appearances as concertmaster of the All-Star Orchestra on PBS stations across the United States and online at the Kahn Academy; recitals, speaking engagements, and appearances with orchestras across the United States; performances of the Brahms Double Concerto with Philadelphia Orchestra Principal Cello Hai-Ye Ni and the Orchestra under the baton of Donald Runnicles; and the launching of the first annual David Kim Orchestral Institute of Cairn University in Philadelphia. He was named concertmaster of The Philadelphia Orchestra in 1999. Born in Carbondale, Illinois, in 1963, he started playing the violin at the age of three, began studies with the famed pedagogue Dorothy DeLay at the age of eight, and later received his bachelor’s and master’s degrees from the Juilliard School.

Tickets for the PYO Concert are only $15-25 and can be purchased online or through Ticket Philadelphia by calling 215.893.1999.