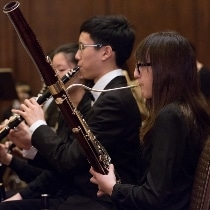 The Philadelphia Young Artists Orchestra (PYAO), an ensemble of the PYO Music Institute, is hard at work rehearsing for their upcoming Holiday Concert — a collaborative effort that is sure to inspire concertgoers with the Christmas spirit. The exciting performance, conducted by PYAO director Rosalind Erwin, will take place at the Upper Darby Performing Arts Center on Sunday, December 21, 2014, at 4 p.m. On this special evening, the Orchestra will have a unique opportunity to collaborate with Upper Darby High School's Encore Singers as they celebrate the holiday season.

Audience members will be enthralled as 6abc Action News anchor Rick Williams makes a special guest appearance to narrate the well-known children's story 'Twas the Night Before Christmas set to music. In addition to being a knowledgeable and valued member of the Philadelphia-area media, Rick is also an actor who performs frequently with his wife and son, Nicholas, in the Moorestown Theater Company. They have appeared in such musicals as The King and I, Guys and Dolls, and Beauty and the Beast, often with Rick in the lead role.

The musical lineup for this concert includes Corelli’s Concerto Grosso, Op. 6, No. 8 – “Christmas Concerto,” which was published in 1714, excerpts from Handel’s Messiah, composed based on the scriptures from King James Bible and Psalms from The Book of Common Prayer, excerpts from Tchaikovsky’s cherished Nutcracker Ballet Suite, and Bass’ Christmas Flourish, an arrangement of famous Christmas carols.

The Upper Darby Performing Arts Center is located at 601 N. Lansdowne Avenue, Drexel Hill, Pa. Tickets are available for $10/general admission; $5/student (ages 7–17) and seniors, and may be purchased at the venue the afternoon of the concert.

Rick Williams has kept 6abc viewers informed for more than 25 years as an anchor and reporter. For much of that time, he has, and continues to, anchor the number-one rated Action News at Noon and Action News at 5pm broadcasts. Rick also reports for Action News' weekly "Crimefighters" series. Before that, Rick co-anchored Action News Mornings, helping to create a dominant early morning program alongside Monica Malpass and Cecily Tynan. Rick arrived in Philadelphia in 1988 from WRAL-TV in Raleigh, North Carolina. Before that, he worked in Huntington, West Virginia and Washington D.C., where he also worked in radio and attended college at Howard University. Although Rick was born in New York, he considers himself a true Philadelphian and has spent much of his time off helping to uplift the community and inspire young people in their academic endeavors.

About The Upper Darby Encore Singers

The Upper Darby Encore Singers, directed by previous Pennsylvania Teacher of the Year recipient Barbara Benglian, is the premier performing group of the Upper Darby High School’s vocal department. The 32-member group has been featured at prestigious area venues such as the Philadelphia Museum of Art, Longwood Gardens, and the Kimmel Center, and has collaborated with such notable ensembles as the Philadelphia Boys Choir and the Lansdowne Symphony Orchestra in addition to the PYAO.  The Encores have consistently earned superior ratings in competitions and adjudications at festivals throughout the northeast, and have participated in service projects both locally and nationally.

About the Philadelphia Young Artists Orchestra

Philadelphia Young Artists Orchestra prepares students through a sophisticated repertoire and rigorous intellectual and musical discipline.  PYAO further provides the opportunity to work with a highly experienced professional conductor, musicians, and teachers; to rehearse a standard orchestral repertoire at a professional level; and to perform in high-profile professional venues throughout the greater Philadelphia region.

The organization’s flagship ensemble, PYO Music Institute, provides the most talented students with advanced orchestral training and performance opportunities throughout the concert season. There are three PYO companion ensembles, which include the Philadelphia Young Artists Orchestra (PYAO), formed in 1996; Bravo Brass, added to the organization in 2003; and Philadelphia Region Youth String Music (PRYSM), created in 2007. Young musicians (ages 6–21) are selected by competitive audition and have represented the United States on five continents. PYO offers classical musical performances throughout the Greater Philadelphia region each year. In addition, the organization is a frontrunner in supporting musical education for children from Philadelphia’s most vulnerable and underserved neighborhoods through the organization’s outreach program, Tune Up Philly. For additional information and upcoming events, visit pyos.org.