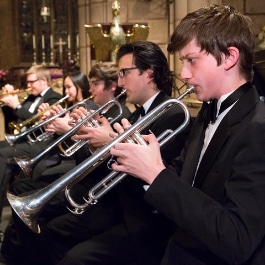 March is a busy month here at PYO Music Institute as all of our ensembles continue to celebrate our 75th Anniversary Season. Highlights include a Side-by-Side Rehearsal with The Philadelphia Orchestra, the Bravo Brass concert entitled Premier Brass, and the eagerly anticipated 2015 Gala Dinner and Concert. The following is a complete listing for each of our upcoming events for the month:

On Saturday, March 7, 2015, at 10:00 a.m., PYO Music Institute will participate in a free and open to the public Side-by-Side Rehearsal with The Philadelphia Orchestra in Verizon Hall at The Kimmel Center. In 1998, when the Philadelphia Orchestra launched their Side by Side Rehearsal as an exceptional educational experience for young aspiring musicians, they selected PYO Music Institute (PYO) as their very first guest music organization. Now, 17 years later, they have once again chosen PYO to sit side by side with their world-renowned musicians in a rehearsal of quality orchestral literature. This is especially significant as PYO is celebrating its 75th Anniversary season. Under the direction of world-renowned Philadelphia Orchestra Music Director Maestro Yannick Nézet-Séguin, PYO’s developing musicians will have the thrilling opportunity to connect with their professional counterparts for one-on-one coaching and mentoring while performing selections that include Tchaikovsky's Fifth Symphony, one of the master composer's most popular works. Making the Side-by-Side even more meaningful is the fact that eight of the ten members of The Philadelphia Orchestra who are PYO alumni are participating in this special event. They include Richard Amoroso (violin), Holly Blake (bassoon),Renard Edwards (viola), Mark Gigliotti (bassoon), Philip Kates (violin), Elizabeth Starr Masoudnia (oboe), Shelley Showers (French horn) and Kerri Ryan (viola).

On Saturday, March 14, 2015, at 7:30 p.m., Bravo Brass will present “Premier Brass” at Saint Mark’s Church, 1625 Locust Street, Philadelphia. The young musicians of Bravo Brass, PYO Music Institute's youth brass ensemble, are poised to inspire concertgoers with this exciting upcoming performance. Conductor Paul Bryan will lead the ensemble members, age 12–21 years, as they perform compositions previously commissioned and/or premiered by Bravo Brass. Bravo Brass will also be joined by bass trombone soloist Barry McCommon in Jamie Wehr’s A Very Barry Fantasy. A member of the genre-bending Nu Directions Chamber Brass, McCommon is known in some circles as the tuxedo-clad classical bass trombonist for The Chamber Orchestra of Philadelphia—in others, he’s the jazz musician audiences have seen backing the likes of Herbie Hancock; and, in another realm, he can be regularly seen on Philadelphia and Atlantic City's R&B/funk circuit playing with musical luminaries such as Patti LaBelle. $15 general admission tickets are available at 215.545.0502.

On Friday, March 20, 2015, at 6:00 p.m., PYO Music Institute will hold its 75th Anniversary 2015 Gala Dinner and Concert at The Union League of Philadelphia. PYO will present an exceptional evening of dining and pre-dinner performances featuring students ranging in age from 6-21 years representing all five PYO ensembles: The flagship PYO Music Institute (PYO), as well as the young musicians of The Philadelphia Young Artists Orchestra (PYAO), Bravo Brass, Philadelphia Region Youth String Music (PRYSM), and Tune Up Philly. Again this year, our art show and sale will proudly present works by the prestigious Studio Incamminati.  This special 75th Anniversary event requires advance reservations, which can be made online or by calling 215.545.0502.