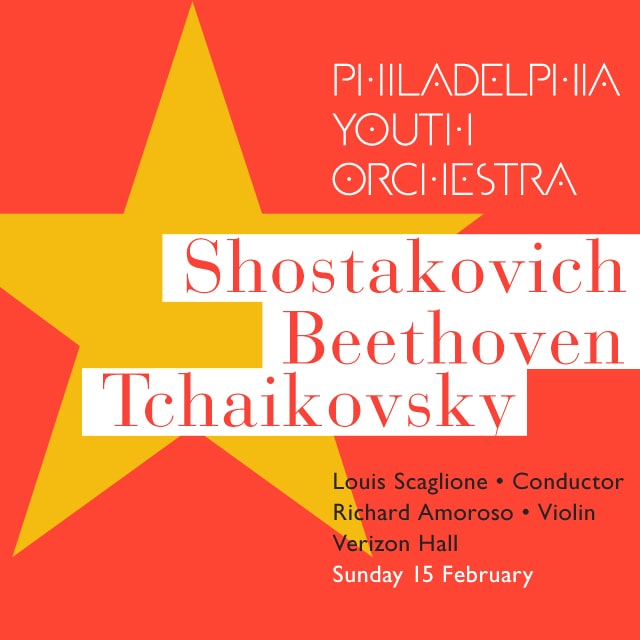 VERIZON HALL AT THE KIMMEL CENTER

At 16-21 years of age, the musicians of the PYO Music Institute (PYO) continue to captivate audiences with their incredible talent, and this concert featuring the works of such  great composers as Shostakovich, Beethoven, and Tchaikovsky will be an outstanding showcase of the students' musicianship. After months of practice, these young musicians will present an amazing array of symphonic and virtuosic masterworks on February 15 at 3 p.m. in Verizon Hall at the Kimmel Center for the Performing Arts. This event will be one of the many featured performances of the 75th Anniversary season for the PYO organization and its various program ensembles. They are delighted that Philadelphia Orchestra violinist Richard Amoroso, an alum of PYO, will be featured soloist and guest artist.

Led by Maestro Louis Scaglione, the performance opens with the trumpet fanfare of Shostakovich's Festive Overture, Op. 96, a work written to commemorate the anniversary of the October Revolution. PYO Music Institute will then perform Beethoven's masterful Violin Concerto, Op. 61, featuring soloist Amoroso. Although Beethoven's Violin Concerto was not immediately successful following its premiere, it ultimately gained a prominent position in the violin concerto repertoire due to the performances and advocacy of Joseph Joachim. The performance concludes with Tchaikovsky's Fifth Symphony, Op. 64, a work containing some of the composer's most popular and cherished themes.

Amoroso joined The Philadelphia Orchestra in 1998 after serving as a member of Concerto Soloists (now the Chamber Orchestra of Philadelphia), The Philly Pops, and as a substitute violinist with the Orchestra. He also performed with various local music groups, including Pro Musica, the Mendelssohn Club, the Philadelphia Singers, the Academy of Vocal Arts, and the Opera Company of Philadelphia (now Opera Philadelphia). A native Philadelphian, he attended Settlement Music School on scholarship and was a proud member of PYO.

Founded in 1939, The PYO Music Institute (PYO) organization, under the executive and music directorship of Louis Scaglione, is proud to celebrate its 75th Anniversary season. One of the nation’s oldest youth orchestral and college preparatory music education institutions for gifted and talented students, the PYO is recognized throughout America for its outstanding musicianship.

The PYO, based in the tri-state region, affords its students unique opportunities to perform with the most talented, professional musicians in the area. Under the guidance of a prestigious faculty that includes members of The Philadelphia Orchestra, students grow as individuals with a keen sense of discipline and positive social interaction that prepares them for many aspects of living a successful life and provides them an impressive college preparatory credential.

The organization’s flagship ensemble, PYO Music Institute (PYO), provides the most talented students with advanced orchestral training and performance opportunities throughout the concert season. There are three PYO companion ensembles that include the Philadelphia Young Artists Orchestra (PYAO), formed in 1996; Bravo Brass, added to the program in 2003; and Philadelphia Region Youth String Music (PRYSM) created in 2007. Young musicians (ages 6-21) are selected by competitive audition and have represented the United States on five continents. PYO offers classical musical performances throughout the Greater Philadelphia region each year. In addition, the organization is a frontrunner in supporting musical education for children from Philadelphia’s most vulnerable and under-resourced neighborhoods through the organization’s outreach program, Tune Up Philly.

« Celebrate the Holidays with PYO
A Prelude to Spring: February Performances »