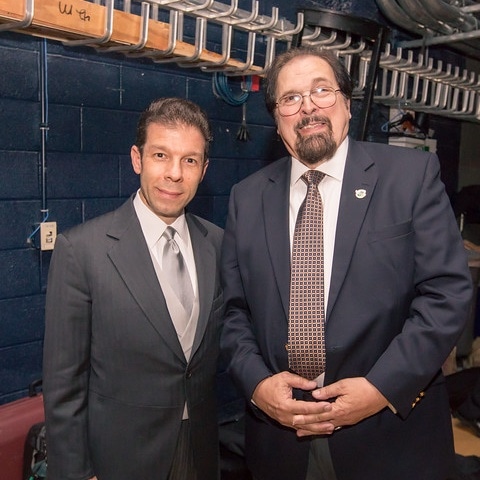 Music teacher Dimitri Kauriga, of Southampton, PA who taught more than 30 years at Philadelphia High School for Girls, had many supporters in the audience when he was named as the grand prize winner in the Fourth Annual PYO Music Institute (PYO) Ovation Award in a surprise presentation. It took place in Verizon Hall at the Kimmel Center on Sunday, June 4, 2017 at 3 p.m. during the 77th Annual PYO Music Institute Festival Concert. The PYO Music Institute’s Ovation Award for Inspiration and Outstanding Leadership in Music Education has been honoring excellence in music instruction since its inaugural year in 2014.

Kauriga was joined by many other finalists (see below) who all received gifts and honorariums. As the grand prize winner, Kauriga received a crystal trophy from Jacobs Music Company commemorating his award, a gift card from J.W. Pepper as well as a $1,000 honorarium from the H.E.L.P.® Foundation. Directly after receiving the honor, Kauriga said, “It’s fantastic to be recognized, but being a part of music is the most beautiful part. When you’re in the process of educating and you later realize the difference you make in someone’s life, it is so meaningful”. He added, “Father’s Day is always special to me. Each year, I get unexpected calls from students on Father’s Day who say something like, ‘You don’t know the difference you made in my life. You were like a father to me.’” As a father whose daughter also attended Girl’s High, he knew the difference music made in his daughter’s life. He also said, “I saw firsthand how music affected her life. I try to treat every student like I would want my daughter to be treated.”

Kauriga—and nine other music teachers—served as the 10 finalists nominated by current and former students. The nominators were asked to respond to the question, “How has my music teacher changed my life?” The nominees were then reviewed by a panel of judges: representatives composed of individuals from music departments at local universities and major music institutions. The panel chose the 10 finalists, as well as Kauriga as the grand prize winner.

Kauriga’s nominator, Elisabeth D’Alessandro (of Philadelphia, PA) met Kauriga while he taught her music in high school. D’Alessandro writes in her winning essay that Kauriga instilled a love of music in her so strong that she decided to pursue her current profession as a music teacher at The Philadelphia High School for Girls. D’Alessandro writes, “Mr. Kauriga was a model of commitment and dedication. He got to school early, stayed late, and rarely took a break. He embodied the work ethic which he demanded of his students. He inspired generations of students to achieve above and beyond what we thought we could. His faith in our ability gave use the confidence we needed to excel.” D’Alessandro received $250 for being the nominator of the grand prize winner.

The PYO Ovation Award honors music teachers in the Delaware Valley who not only successfully teach music to their students, but also instill confidence in them. The award is endowed by H.E.L.P.® Foundation and sponsored by J.W. Pepper, Jacobs Music Company with WRTI-90.1 as a partner. After WRTI’s Jack Moore announced Kauriga as the winner on stage, the PYO Music Institute performed its concert. The concert was conducted by Maestro Louis Scaglione and featured special guests: violinist Michael Ludwig, The Mendelssohn Club of Philadelphia, The Philadelphia Boys Choir & Chorale, and guest vocal soloists Alexandra Nowakowski, Eric Reiger and John Viscardi. The concert also featured a world premiere by the Inaugural Young Composers Competition winner, Alan Mackwell. The over 100 PYO student musicians, ages 14 to 21, performed Mackwell’s winning composition “III. Secretly Ramses the Second,” along with Alexander Glazunov’s “Violin Concerto in A minor” and Carl Orff’s “Carmino Burana.” The concert exemplified the organization’s immense young talent.

Kauriga and the other nine finalists were invited to watch the PYO 77th Annual Festival Concert after the completion of the Ovation Award ceremony. The list of the admirable 2017 finalists includes:

Dimitri Kauriga is a teacher and multi-talented musician. A native Philadelphian, he plays piano, flute, organ, saxophone, he sings and conducts. For over 30 years, Dimitri was Director of Music at Philadelphia High School for Girls. While there, he developed well-regarded marching bands, orchestras, concert bands and jazz ensembles. He was also conductor of the Philadelphia All-City Jazz Band, Orchestra and Concert Band and performed numerous works at the Academy of Music and Kimmel Center. From 1984 through 2003, Dimitri was Professor of Music and adjunct flute instructor at the Community College of Philadelphia. He is co-director of the Kauriga Balalaika Orchestra with his brothers, Greg and Paul. Dimitri is a co-music director of Bensalem Presbyterian Church with his wife Lenore. Dimitri completed graduate studies at Temple University, Eastern College, West Chester University and the University of New Hampshire. He studied flute with Murray Panitz and John Krell of the Philadelphia Orchestra as well as John Wummer, principal flutist with the New York Philharmonic and the Pablo Casals Orchestra. In addition, he studied flute and piccolo with Frank Vercacci, who was Lilly Ponn’s personal flutist. Today, Dimitri has a small namesake orchestra, Kauriga Orchestra, conducts the Bensalem Presbyterian Choir, is a member of the Pen Ryn School District Board of Education, and gives private piano and flute lessons. He is heavily interested in ethnic music, particularly all forms of Slavonic music.

About the PYO Music Institute:

Concluding its 77th year, training tomorrow’s leaders, the renowned PYO Music Institute organization, led by President and Music Director, Maestro Louis Scaglione, is one of the nation’s oldest and most respected community music education and youth orchestra performance programs, providing talented young musicians from across the tri-state area with exceptional musical training. Students go on to excel in many diverse fields, and it is with pride that PYO Music Institute notes that many members of the prestigious Philadelphia Orchestra are alumni.  The organization is comprised of six program ensembles designed to meet specific needs and experience levels of students selected through a competitive audition process. The anchor group is the PYO Music Institute (PYO), conducted by President and Music Director Louis Scaglione, featuring 120 gifted instrumentalists who range in age from 14-21. Young musicians 12-18 years old are featured in PYO’s companion ensemble, the Philadelphia Young Artists Orchestra, which is led by Director and Conductor Maestra Rosalind Erwin, who is Music Director and Conductor of Drexel University Orchestra. Philadelphia Young Musicians Orchestra (PYMO), directed by Maestro Kenneth Bean, is a beginning to intermediate-level full symphonic orchestra that provides most students with their first introduction to large orchestral playing featuring students age 10-17 years old. Bravo Brass, directed by Curtis Institute Dean of Faculty and Students, Paul Bryan, is an all brass ensemble for promising middle and high-school instrumentalists. PRYSM (Philadelphia Region Youth String Music) and PRYSM Young Artists ensembles provide string large ensemble and sectional master class instruction for beginning and intermediate musicians ages 6-14. The director and conductor of PRYSM is Gloria DePasquale, cellist with The Philadelphia Orchestra, and conductor of PRYSM Young Artists is Andrea Weber. Tune Up Philly (TUP) is PYO’s engagement program, directed by Paul Smith, that focuses on creating and inspiring true community by providing children in under-resourced communities with invaluable opportunities to learn and perform a differentiated orchestral music curriculum. www.pyos.org.

About H.E.L.P.® Foundation and LCG, Ltd.:  H.E.L.P.® Foundation, the philanthropic division of LCG, Ltd., dedicates time and resources in furtherance of community service and in support of charitable causes and non-profit organizations, both regional and nationwide.  LCG fosters an organizational commitment to compassionate service as the nation's largest privately held employee legal plan provider.   LCG maintains its national headquarters in Bala Cynwyd, PA, and has been implementing its exclusive H.E.L.P.® legal plan for worksites of all sizes and industries since 1995. For more information, please visit www.helpfoundationcares.com.

About J.W. Pepper: .J.W. Pepper®, based in Exton, PA, is the leading retailer of sheet music in the world. In business for over 140 years, they have 11 store locations and two distribution centers across the country. They review over 21,000 new titles every year and hand-select the very best. Customer care is at the heart of their service. For more information, visit jwpepper.com.

About WRTI: WRTI is a member-supported, public radio station that broadcasts the very best classical music and jazz recordings, and produces innovative, entertaining, and informative content. The station has 14 frequencies, extends west to Harrisburg and north to Scranton and Wilkes-Barre, and reaches as far south as Dover, DE and to the South Jersey shore area and can be heard on-line at WRTI.org.