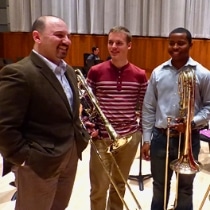 Lenfest Hall at the Curtis Institute of Music

PHILADELPHIA, PA (October 22, 2014) — Paul Bryan, who serves as both the Director and Conductor of Bravo Brass, an ensemble program of PYO Music Institute, and the Dean of Faculty and Students of the Curtis Institute of Music, is bringing his two worlds together for one special evening. Under the direction of Conductor Blair Bollinger, Bravo Brass will join the Curtis Institute of Music Brass and Percussion Ensemble for a free concert on November 10, at 8 p.m., showcasing the works of Richard Strauss, including the composer's largest brass ensemble works, Festmusik der Stadt Vien and Feirlicher Einzug. It will take place in Curtis's Lenfest Hall at 1616 Locust Street in Philadelphia. Admission is free; seating is limited. For information, call the Curtis Patron Services Office at (215) 893-7902 or PYO Music Institute at 215.545.0502.

Bryan says this performance will bring together a host of wonderfully talented young local musicians from both organizations. “This is a rare opportunity for Bravo Brass students to rehearse and perform side-by-side with the best brass students in the world. For me, it’s especially rewarding to be involved in a Curtis concert with Bravo Brass.”

Bravo Brass, founded in 1997, is a brass ensemble for the youth of the Philadelphia area led by Director and Conductor Paul Bryan. The only year-round brass ensemble in the Philadelphia area and one of only three in the country, Bravo Brass offers the highest level of individual and ensemble training and performance opportunities for the most accomplished young brass musicians in the area.  Bravo Brass is a program ensemble of PYO Music Institute.

About Curtis Institute of Music

One of the world’s finest and most selective conservatories, the Curtis Institute of Music offers a tuition-free, performance-inspired learning culture to 175 students from all corners of the world. Nurtured by a celebrated faculty, its extraordinary young musicians graduate to join 4,000 alumni who have long made music history. From Leonard Bernstein to Alan Gilbert, Samuel Barber to Jennifer Higdon, Anna Moffo to Eric Owens, Richard Goode to Jonathan Biss, Curtis alumni personify the school’s commitment to excellence—onstage and in their communities—inventing careers with impact.

A busy schedule of performances, including more than 200 a year in Philadelphia and around the world, is at the heart of Curtis’s distinctive “learn by doing” approach. Dedicated to a tradition of excellence and innovation since its founding in 1924, Curtis is looking toward its centenary in a flexible and forward-thinking way, evolving strategically to serve its time-honored mission.

The organization’s flagship ensemble, PYO Music Institute, provides the most talented students with advanced orchestral training and performance opportunities throughout the concert season. There are three PYO companion ensembles, which include the Philadelphia Young Artists Orchestra (PYAO), formed in 1996; Bravo Brass, added to the organization in 2003; and Philadelphia Region Youth String Music (PRYSM), created in 2007. Young musicians (ages 6–21) are selected by competitive audition and have represented the United States on five continents. PYO offers classical musical performances throughout the Greater Philadelphia region each year. In addition, the organization is a frontrunner in supporting musical education for children from Philadelphia’s most vulnerable and underserved neighborhoods through the organization’s outreach program, Tune Up Philly. For additional information and upcoming events, visit pyos.org.